A look at the health industry news from PR Newswire in September and October that you might have missed. 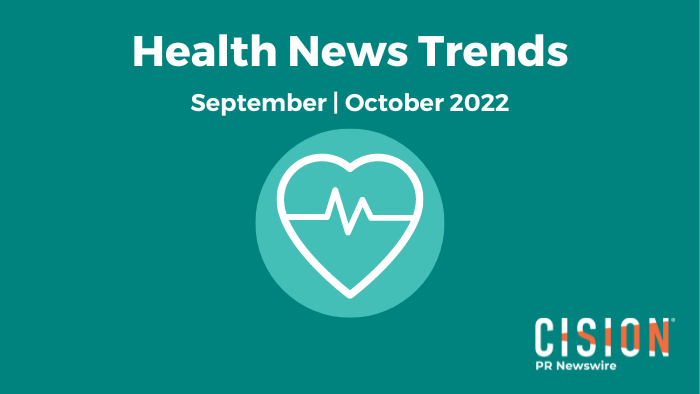 PR Newswire regularly sends out a great deal of healthcare press releases that cover numerous topics. For example, more than 6,500 healthcare-related releases went out via PR Newswire in September and October.

And as we moved into fall, we moved into flu season. Organizations are encouraging people to get their flu shots, discussing new vaccine technology, and educating consumers on the risks of the flu.

Let’s take a look at the healthcare trends we have noticed over this two-month period.

Some of the Most Popular Healthcare Releases:

Over the past two months, these healthcare press releases received a standout number of reads and/or engagement:

Here’s a look at a few of the trends we noticed among healthcare-related press releases in September and October, with a few examples of each.

As the stigma around mental health diminishes, information surrounding the topic has only increased.  New research, statistics, and resources are released daily, only further promoting visibility, advocacy, and awareness of the critical role mental health plays in our everyday lives.

Below are a sample of stories released in September and October:

Since 1985, October has been designated as Breast Cancer Awareness Month. In September, just before the start of Breast Cancer Awareness Month, journalist Katie Couric announced she had been diagnosed with breast cancer earlier this year. According to the American Cancer Society, breast cancer accounts for about 30% of all new cancer cases in women each year in the United States.

Press releases about breast cancer covered many topics – from the importance of screenings to reports on healthcare inequities, corporate giving, and awareness. Here are a few examples:

While the COVID-19 pandemic remains a prevalent topic, September and October saw an uptick in releases for a different illness: the flu. According to the Centers for Disease Control and Prevention, the U.S. flu season occurs in the fall and winter, and it peaks between December and February. Experts are warning it could be a rough flu season, and the flu is already starting to spread in the U.S.

Here are a few examples from September and October:

As flu season gets into full swing, we should expect the number of mentions in press releases to only increase.

As the world further propels itself into the digital age, the healthcare industry has followed suit tenfold.

Algorithms and machine learning have helped health companies deliver better care for their clients and patients by enabling them to process information faster and more accurately.  New products, services, and other offerings have resulted from this growing utilization and many companies are even partnering to further expand their capabilities.

Through September and October, here are a handful of stories sent via PR Newswire:

COVID-19 is still a hot topic in healthcare with threats of a fall/winter "twindemic" or "tripledemic" with COVID, the flu, and RSV on the rise. But as summer turned to fall, we saw a shift to companies and organizations focusing on different aspects of healthcare and lending their resources to mental health and breast cancer awareness, along with a focus on bettering the healthcare experience with technology.

Wendy Brickner is a Senior Customer Content Specialist in PR Newswire's Customer Content Services department. She has been with the company since 2007. Outside of work, her favorite things are traveling, spending time with family and friends, and relaxing with her giant Golden Retriever, Roosevelt.

Cliff Moore is a Senior Customer Content Specialist in PR Newswire's Customer Content Services Department and has been with the company since 2013. When not assisting clients with their press release needs, he enjoys all things pop culture, plants, hosting gatherings, and playing any game you can think of.