Around the Wire: 4 Healthcare News Trends

A look at the recent health industry news you might have missed from PR Newswire. 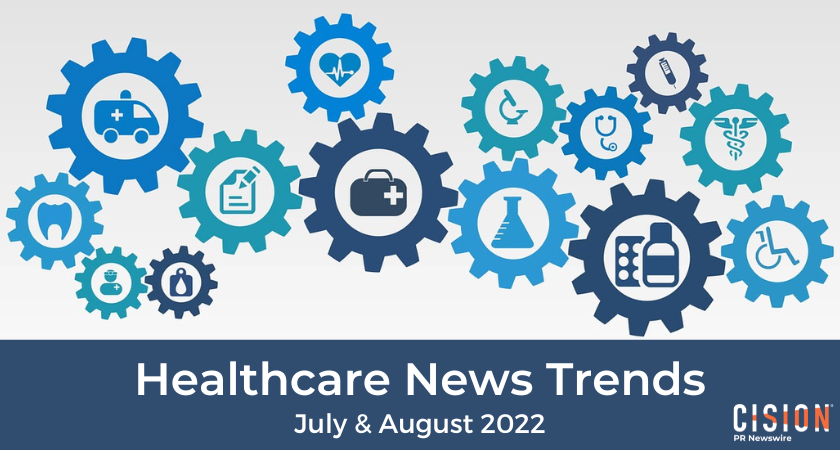 Keeping up with all the healthcare releases sent via PR Newswire can be tough. In July and August, we distributed more than 6,000 healthcare-related press releases in the U.S. and Canada.

Our team monitored those releases and noticed a few recurring themes.

As the country continues adapting to a new normal during the pandemic, organizations are beginning to look at what life looks like after COVID-19, including its effects on mental health, healthcare costs, and even voting.

But the pandemic isn’t the only thing on healthcare companies’ minds. Over the past two months, we’ve seen a number of releases related to monkeypox, the passing of the Inflation Reduction Act and its impact on healthcare, and reproductive health in the wake of the Supreme Court’s decision to overturn Roe v. Wade.

Let’s dig into the trends we’ve noticed in healthcare news in this two-month period.

Some of the Most Popular Healthcare Releases

Over the past two months, these healthcare press releases received a standout number of reads and/or engagement:

We scoured the 6,000+ healthcare press releases sent in July and August and identified several recurring topics.

A post-COVID world (or the start of one)

The pandemic continues to dominate the news, though that may be changing as the world begins to see it more as a normal, manageable part of life. In July and August, PR Newswire issued more than 5,200 releases in the U.S. and Canada that mentioned “covid,” which came from various industries (not just healthcare). It's a still-impressive number despite being a nearly 19% drop from the prior two-month period.

While news announcements surrounding COVID-19 prevention and treatment are still regular occurrences – including the FDA’s recent approval of updated COVID-19 boosters - we’ve also noticed a number of press releases with analyses of the pandemic’s after-effects on society. From mental health to healthcare costs, we saw stories covering various impacts of the pandemic.

Recent data shows that Americans’ priorities around health and social activities are shifting, and general anxiety about the pandemic is declining. So it’s no surprise that news announcements related to the pandemic are starting to shift focus to its after-effects and how we’re living our lives while it continues.

Here are a few examples from July and August:

The number of releases related to infectious disease control remained relatively unchanged from the prior two-month period. July and August saw 380 releases sent out under this topic, compared to 387 in May and June. So despite the changing angle of these stories, it's clear that the pandemic is still top of mind for many companies.

Reactions to the IRA bill passing

In August, the Inflation Reduction Act (IRA) was passed by the Senate and House and signed by President Biden, enacting it into law. The bill, in part, allows Medicare to negotiate prices for high-cost drugs and extends the expanded Affordable Care Act program for three years, through 2025. It also caps insulin prices at $35 per month for Medicare members.

Over the course of July and August, the bill was mentioned in nearly 90 press releases sent by PR Newswire in the U.S. and Canada.

Companies across the healthcare industry and beyond issued responses to the bill’s passing, including:

As mentions of “covid” decreased over the past two months, the number of releases mentioning “monkeypox” exploded. After the WHO declared it a public health emergency at the end of July, healthcare companies upped their news announcements focused on the viral disease.

July and August saw 60 press releases mentioning “monkeypox” cross the U.S. and Canada newswires, compared to 23 in May and June, a 161% increase.

Although case numbers have somewhat leveled off, the CDC reported nearly 700 cases after Labor Day and Texas reported the U.S.’s first death from monkeypox in late August. So we can expect to see more releases tied to the disease in the coming months.

Press releases about monkeypox ran the gamut, from testing to government action and advocacy. Here are a few examples:

Looking ahead, we’ll also be keeping an eye on releases related to polio, as new cases recently led to a state of emergency declaration in New York.

At the end of June, the Supreme Court of the United States overturned Roe v. Wade, ending 50 years of abortion rights in the country. The decision forced companies to consider whether they would make statements on the ruling. Data from Cision found that decisions to issue a statement or stay silent both carry risks and organizations wouldn’t be able to dodge the issue forever.

We saw a spike of releases mentioning “abortion” on June 24, the day the ruling came down, and while the announcements tied to it have declined somewhat, they are by no means at an end.

Since the ruling was made, we’ve seen a number of press releases sent via PR Newswire that focus on women’s health – especially reproductive health – as well as the ruling’s expected impacts on the upcoming midterms.

July and August saw more than 150 releases identified as both health and women-related news; a decline of more than 40% from the prior two months as the country and companies anxiously awaited the SCOTUS decision.

So while the dust may have settled from the initial ruling, it’s clear that companies are still working to respond to it. And as the midterms approach and new legislation continues to be introduced, both at the federal and state levels, we're likely to see a number of releases tied to the issue cross the wire.

The country may still be grappling with COVID-19 and its effects on our lives, but several breaking news stories over the summer had outsized impacts on healthcare news distributed by PR Newswire. Major legislation and a new viral disease emergency led companies in the healthcare space to issue their own responses and updates.

Rocky Parker is the Manager of Audience and Journalist Engagement at Cision PR Newswire. She's been with the company since 2010 and has worked with journalists and bloggers as well as PR and comms professionals. Outside of work, she can be found trying a new recipe, binging a new show, or cuddling with her pitbull, Hudson.